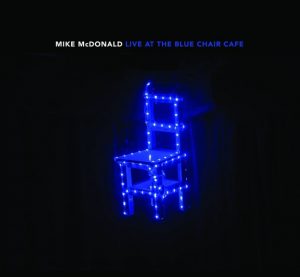 After years of solo shows, Mike McDonald FINALLY documents what thats all about.

Mike McDonald was playing solo shows in Edmonton’s alternative/underground scene when absolutely no one else was. With his solo pursuits, and bands he was in like The Dusty Chaps and Jr Gone Wild, he lit the fire that became Edmonton’s (and some would argue, Canada’s) alternative roots rock scene. Being fundamentally a band guy, Mike was never able to bring himself to regard his solo pursuits seriously, even though at every single gig he did people would ask for a CD. They wanted to bring home cheeky songs like Lying To An Activist. Or the crude ( yet incredibly poignant to musicians), Fifty Dollar Whore. Or his sentimental tribute to his children What I Mean. Or the 3 and a half minute biography Relevant Moments. Fans of McDonald’s turn of phrase and perspective on the world will find lots to chew on here.

Unadorned by the electric chaos of a band and massive volume, Live At The Blue Chair Café is edgy folk, peppered with story and commentary, often hilarious. He’s a true alternative to affected bombast and disengenuous self aggrandizing. Mike McDonald is the real deal.